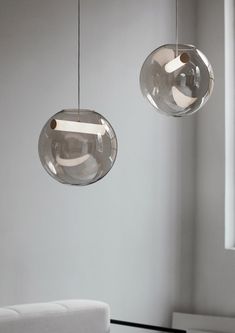 Reveal is a minimalist pendant light created by Norway-based designer Silje Nesdal. Reveal is a pendant lamp, released with the Norwegian brand Northern, January 2019. Reveal is a lamp that gives away its secrets. In its nakedness it reveals the simplicity in how the light source, being the structural element, is carrying the shade of glass. A simple sphere of hand-blown glass forms the shade, focusing attention on the light source itself. The lamp is mounted, by simply turning the led tube into